It's the 2 year anniversary for Planetside 2!
That is all.

In other news, by request: You can now change the game window size with your mouse, and the window will auto-correct itself to the 4:3 ratio.
Posted by ZephyrBurst at 9:59 PM 3 comments: 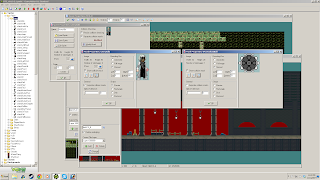 A comment here inspired someone to say a thing to me, which inspired me to code in achievements. Luckily some of the UI and code was already done from when I was toying around with the idea.
Posted by ZephyrBurst at 7:09 PM No comments:

I had walked outside for my lunch break and when going around a corner, a grackle was also walking around the same corner. The two of us would have collided had we not been paying attention. I stopped when I saw her and she did the normal quick flight, but she only flew away about 3 feet before returning. The bird recognized me and I guess she got really excited because she kept flying in front of me. Grackles, like many birds, cannot hover very well. So she kept fluttering to the wall next to us and kicking off of it to remain in front of me. Finally after about 3 times of doing that, she landed right at the base of my feet.

I do wonder if I had extended my hand, if she would have landed on it. Another of the birds out there, that is far more friendly, has jumped up on my leg when I was sitting on a bench.

Chapter 19 Progress
It's a slow thing these days, with having a full time job and trying to maintain a social life, both online and offline. But it is always moving forward every day, little by little. One of the three major locations is completed. It took a bit longer than I wanted due to the second half of October being exceptionally busy for me.

It is kind of weird to be almost done though, both happy and sad about it... mostly happy. I like seeing things finished.

Release Date
I still don't know just yet, but I think late February or early March next year. That's just a guess, it could be sooner, it could be later. But that's my new goal. I'm not going to rush things, I'd rather the game come a bit later rather than suck.

Also, I haven't played Planetside in over a week. I'm putting the game down until I finish DT3.
Posted by ZephyrBurst at 1:10 AM 6 comments: