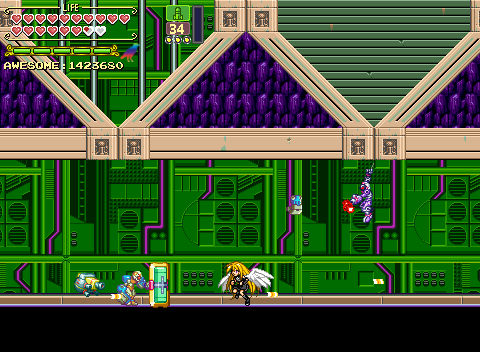 Posted by ZephyrBurst at 3:31 AM 5 comments:

Is Shovel Knight which was just released shortly ago. I don't think I need to say much about it. It's on the WiiU, 3DS, and PC (+Steam). The link there is the game's official site, which has all the infos and a video.

You could also check out Brian's LP of it. Looks like he's doing that and Tobias. He'll be finishing Tobias, he has no choice really.

DT3 Progress
Chapter 18 is going along well, slowly because real life is being a needy female dog right now. Lots of new AI to code as well. Jerry and Claire get to face off against probably the toughest enemies in the trilogy. These guys are the bulk of the end-game combat. Maybe a video to showcase just a single group, maybe not. Probably not, it gives away surprises.
Posted by ZephyrBurst at 2:00 AM 1 comment:

Have you heard about 'Tobias and the Dark Sceptres'? There's a link that I think you should follow in the previous sentence. This was shared to me by two people already. It's a game that was made in the span of 13 years, the video shown in the link 4 sentences ago will tell you all about it. I think you should have a go at this, I recently watched WhattayaBrian's first Let'sPlay video of the game and I'm getting some good vibes from it. It's an odd game, definitely made by someone who started it when they were young, with a few technical oddities. However, there's a certain charm about it that's really nifty and there's a lot of really cool little touches that show the creator really loved making it and put a lot of himself into it.

Brian's first LP video of it can be found by clicking anywhere on this entire sentence.
Posted by ZephyrBurst at 3:00 AM 4 comments:

I mentioned a long time ago that DT3 was going to have a group that all supported one another and mentioned a key unit in the group. That one being specifically a support unit that could heal/shield allies. This is no longer happening, but... it is happening. Instead I've repurposed that idea to be a bit more broad. In the later parts of the game, the protagonists are constantly facing off against a certain group, and within this group are various support units. Instead of having a single enemy type that can do everything and only support its squad, it can now support any ally within its faction. (Remember in the scan info, the icon that showed if it was a Mario or Zelda related enemy?)

Before this change, I was going to allow support bots to use their abilities on one another. With this more broad approach, I felt that would be a bad idea, and for science I tested it. It was rather disheartening to see a shielding bot being fully recovered by a healer when it was nearly down. Even worse though, was the healer being shielded. This constraint felt right after that.

The healers and shielders can only target a single unit at a time. Healers check all nearby units and prioritize both on the group's current HP% and a hidden value that all of that faction's enemies have. (Some of them are a hair bit more important than others.) At the time of typing this, they can heal up to 150HP/sec, but after doing more field tests, that may change. It tends to keep its target between it and the player, but it still has to be close to its target to heal.

The shielding bots can shield a single ally and make it completely invulnerable. It has no cooldown or overheat, so it's able to hold the shield indefiniately, however it has to be fairly close to its target to shield it. It isn't as active at playing 'keep-away' from the player as the healer.

There is one other type of support unit, but that one is a secret.

All support units have an auto-regeneration that (once again at the time of typing this) recover 15HP/sec.
Posted by ZephyrBurst at 11:25 PM 3 comments:

After spending about 30 minutes trying to make an enemy that checks all of its allies HP% counts and tries to find the lowest one (which is easy), but may need to find the second or third next value, I remember that Game Maker has data structures and this could have been solved in seconds. Fuck me.

I drew a picture displaying my frustration with myself. Done in Photoshop for overkill. 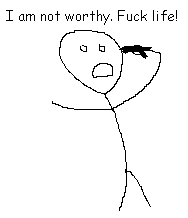 Posted by ZephyrBurst at 4:35 AM 2 comments:

Now that I've been reminded about posting a grackle video, here it is.


Map Headers
I got asked about those little window map headers that DT1 had and asked A LOT, by both the testers and all of you that played the DT3 demo if they would return.

The sentence above should tell you what happened. It wasn't till a fair ways in that I decided to put that in and you can imagine the crazy amount of maps as a backlog I suddenly had. At this point in the game, most of it was in the Gate levels as they take a large portion of the gameplay up to Chapter 16. For quite a few of the Gate and Nightmare Gate levels, I allowed the testers to add in the map quotes. They've had a big impact on the game and that seemed like a good way to let them put a bit of their voice in there.

Progress Update
Chapter 17 is done, so that leaves 3 more plot points to cover. Getting closer. The next level involves mountains, skies with stars, and snowballs. And some other things that have nothing to do with the rest of that.

E3
It had some games that looked fun. That is all. Oh right, Splatoons looked really neat. I'll be following that one for awhile. I should fangasm over the Zelda trailer, but not much was shown and I don't think they'll be showing anything else during the rest of E3. I just need a little more than Link suddenly being chased down by some thingie, then turning around and going all Matrix on it with a wonky looking bow. It looks pretty at least, but I knew that would be the case.
Posted by ZephyrBurst at 2:48 PM 5 comments: