This month at work I did a promotion thingy and am no longer working outside, which is both good and bad. I don't get to see my birds all day, but I don't have to die of heat like I did every day last summer. I do go outside on every lunch break though and my birds are still as happy as ever to see me.

Here's a picture of one getting a bit upset that another bird was approaching. He likes being special. 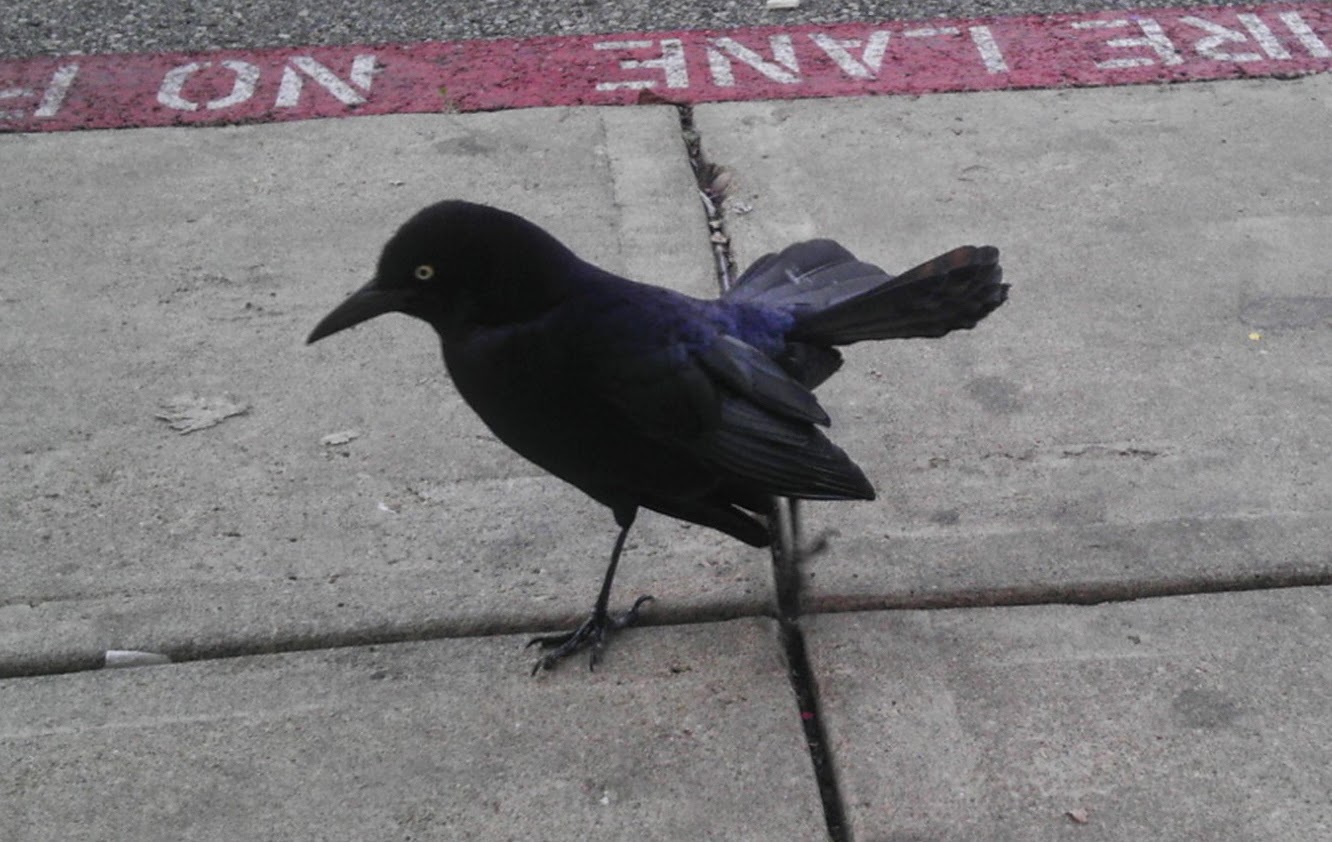 I like their poofy feathers when they get upset. This one doesn't like either males or females around when he approaches.
I'll be posting again soonish with a video of a bird, but I need to cut out some useless stuff where I didn't turn off the recording and all that.

DT3 Stuff
Chapter 17 is getting somewhat close to being done. I wish I had more time this last month to work on it, but next month should change that.

In this shot, Claire is about to run face first into a laser because the turrets above her know how to lead their targets. She'll learn after the first mistake though. Oh yeah, spoilers, some enemies in DT3 can lead their shots.
Posted by ZephyrBurst at 2:59 AM 3 comments:

Will Talk About Birds Next Time

I removed the DT3 demo on April 1st for the little Breakout game. The DT3 demo will stay removed as its purpose was primarily to get feedback on a greater scale and it succeed in that. Keeping it up now, I feel, will give bad impressions of the final version, which is much different than that demo.

Also I lied, there's more than 3 Ability Sets for Jerry and Claire. They don't show up for Gates, but instead for specific events. What they are is a secret of course. Essentially, alternate ways to look at and mix certain genres into platforming happen from time to time.

Progress
Currently focusing on Chapter 17 content, which is the start of the final parts of the story. Gameplay wise, I try a different approach to enemies spawning in and how they engage the player. One enemy from DT1 made its way into this level. Our friend from The Hideout, the Aero Scanner, is back. He was the one with the laser pointer that dealt damage if you either weren't using i-frames or had something between you and it to block line of sight. The environment and its hazards also plays into some of the rules of how enemies engage the player in the level in Chapter 17.

No more info to give!! It's hard to talk about the game on any specifics at this point because giving away anything would spoil the experience.


Another Big Change
WhattayaBrian presented a suggestion to me a few months back about how to change the way arrow ammo worked. The basic idea was when the player runs out of ammo, it goes into a somewhat lengthy reload and afterward, the player has their arrows back. Each pickup would add 1 to the capacity instead of 5. His issue with arrow pickups was that they didn't feel very substantial. I actually disagreed that arrow pickups felt insubstantial, but the idea itself went onto fixing another issue. That being limited ammo. I like the idea of ammo shortage and what it does, but all the other ability sets in the game (missiles worked the same as arrows and are included in this change) allow the player to be completely self-sufficient.

As a designer, if I know the player can't run out of ammo completely, there's a lot more I can do. So I presented the idea to the testers to see what they all thought about it and what they thought could be done. My goal was mainly to make the player self-sufficient. The player now starts with 10 arrows. (Missiles will follow these rules.) Quiver pickups only add 1 to the capacity now, following the above suggestion. For ammo recovery, it follows along the other sets of auto-recovery over time. There are new rules over the recovery rates for arrows and missiles that make sure the player can run out of ammo, but that it can replenlish them reasonably, even mid-combat.

There's also this other weird thing with video games and things in limited quantity. They feel more important and precious and therefore aren't utilized as often. WhattayaBrian mentioned this about arrows. (and he wasn't the only one) NNZ recently said, "Even if I have 500 Megalixirs, I won't use them till the final boss." or close to that. This addresses that issue with arrows and missiles too. They were intended to be used alongside the primary weapons, not an after thought, or something you saved for THAT moment or a boss fight.

It hasn't been live for the testers for very long, but the feedback for it has been positive so far. Further testing will reveal how much more tweaking will be needed.

A Question
This appeared a few days ago.

“Will the final chapter be similiar to the Secured Data Segment in the sense that it is a huge dungeon with a new awesome but challenging gimmick (SDS did have the colour wheels)?”

I don't want to say much about the final chapter. That said, it's not going to mirror what DT1 did in regards to what it did in contrast to the rest of the game. In DT1's final level (Secured Data Segment, we'll not count the power trip that is Primary Memory), I aimed to make the player feel somewhat lonely, frustrated, and a bit anxious. On the gameplay side, it focused almost entirely on the color fields.

DT3's final dungeon isn't going to be about any specific gameplay gimmick or even about the level itself. Will it be challenging? Of course, it wouldn't be DT without that, but that's not the focus. I've done the “This is going to be challenging” to death, I can do better than that.

“Is the DT trilogy an alegory about the hardships of video game development?”

Not sure where this idea sprung up from but you're thinking too hard about it. I shall give a silly answer. It's an alegory about myself and my misunderstanding of the English language put in video game form.
Posted by ZephyrBurst at 5:33 AM 12 comments: