Edit: (September 13,2012) The DT2 update is finished! The DT3 testers have access for now while I do a few extra tests. The score converter seems to want to be finicky, plus I suck, so that doesn't look like it'll make it in. Though I recommend to play the game fresh anyway.

Finally remembered to bring my camera during the last few days to get some pictures of the birds, though nothing out of the ordinary happened. Still, some of them might be entertaining. 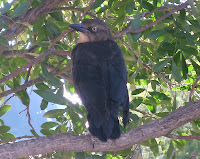 This bird doesn't know me, or at least I don't recognize her, but she still let me come fairly close. 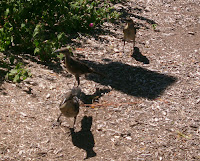 The only bird out of these that I know is the one walking close to me.


The one on the left with the gray fuzz has been flying down to ask for food for the last few days. The middle one with the soft features looking up at me has known me for roughly a week. Or at least that's as far as I can remember her reoccuring. The bigger one I've never seen, but he came close quite a few times that day and was fairly aggressive to the other birds.

I should have gotten a video of this. They were all being cautious around the donut and taking turns with it. I did manage to get one mid-flight, but my camera is really bad. The one that looks like it's yelling is the same bird on the left of the previous image. 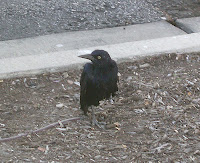 When I first saw this bird, I thought he was the short tailed one I have known since I started out there a few months ago, but it turns out he's not the one. His beak is shaped a bit differently and he looks too timid. That and his tail feathers don't appear to have been taken off. The one I know has it a bit rough around the tail feathers. Took a picture anyway. 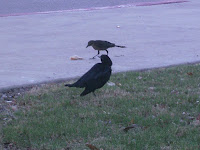 Same bird from the previous picture, just an hour later. His left leg hurts him when he walks on it, which is why he's standing on his right constantly. It'll heal.

Caught this younger bird perching on a car. The look she's giving is one of, "Please leave me alone." 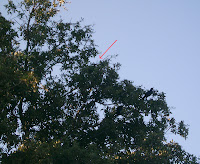 The male with the short tail feathers that I know is up there. Can you see him? He was calling out, but not to me. The flock was getting ready to leave for the night.

DT2 LP
DT2 LP by DieHammerbrueder
The first one! Being played by Steve, who has not played it before. Commentary is being done by both him and Slit08. The LP is before the big update, and even before the previous one where I had toned down a few things and fixed a few bugs. They know of the update, but they're going to continue with this LP anyway. It'll be very easy to see the differences between the two versions.

Speaking of the update. The release date is the 17th. I should have it done tomorrow or the next day, but I'm going to let it sit in the dropbox for the testers to poke at if they want. You know, cause I often miss things.

Other Things
There were other things I was going to post about, but I didn't make notes of them, so they'll be in the next post. I guess... ponies? o_O
Oh right; Red Vines > Twizzlers
Posted by ZephyrBurst at 2:48 PM

I'm surprised that the bird doesn't fly away.

I'm sure if my neighbor opened her cage, its birds would do that.