Haven't had too many chances to get some good pictures of the grackles, but now that fall is here, there will be a lot more of them. Although more doesn't mean better. All the new grackles coming in don't know me, so I'm hoping the ones that do know me don't move on.

The left one was waiting for me to throw out some food while the one walking away was... well walking away. 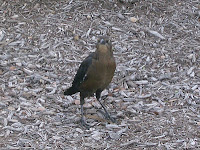 Well look who it is!

Another LP
I was shown another LP of DT1 that started a few days ago by a youtube user named ShadeWearingHero. It has voice commentary by a guy who seems to know he's getting into something harsh. No issues on resolution and frame rate. His LP can be found here. It seems he was shown the game by a friend. I have a feeling said friend just wants to laugh at him.

I was told of another LP supposedly in spanish, but was not given a link.

Speaking of LPs, I laughed at raocow's despair and moment of silence at the end of Section 6.

Twitter
There is a twitter dealybob that was added to the side which links to my twitter account that isn't used. I think I started the account simply to reserve the name. Lets see how long that thing stays on the side till I decide to remove it due to uselessness. Man this paragraph's sentences are kinda long.
Posted by ZephyrBurst at 5:29 AM

Okay yeah the final boss in the DT2 shooter section can be chained now.
There still seems to be a chaining issue with the last phase of the next to last boss though.

The phase when it starts spinning madly and you can't get enough shots to connect with the main body through it's armor to keep a chain. Not to mention that it moves up and down and you can't follow it because the pattern is too dense.

Oh right, that boss... I think I'll put in the same half time method for that boss as with the final for any future patches then.

My score for 1-1 is 18040. That's with chaining the entire level without taking damage with a 110 time penalty. There are definitely ways to shave off even more time.

Well I had to bomb the penultimate boss to keep the chain going and I died to the final boss in that run. So there's probably room for improvement on that score.

I started playing the demo for DT3 today. Finished Gate 1, and found the town.

Either I'm being stupid and not seeing it, or a nice addition to this game would be some sort of mission recap. I met up with the two people in the first building, went through the cutscene, and Jeremy claims to have fixed something regarding my jump height or something. However, I haven't noticed being able to jump any higher or anything like that.

I'm a bit confused as to where I'm supposed to go now. Some of the houses have a second floor with an exit that I can see, but I can't reach. If I head towards the bridge, I can't reach the other side and I don't see any way to climb up the room inside the building there.

Mind giving me a hint?

I also have a few other things I'd like to mention on this game. First off, this game is a blast to play. Out of what I've seen so far, I'm already finding this much more fun than the first game, which was already one of my favorites.

I did have an issue with the Gate 1 boss, though. Would it be possible to give it something like a couple seconds flinching time after hitting it so that you can fall through? There's not much clearance between the boss and the ceiling, and it's somewhat difficult to make a safe landing. (By the way, it's a bit funny how you said before that you felt you had overused stationary bosses in the first game, and the first major Gate boss was a stationary boss! Still fun, though.)

Second, I don't know how difficult it is to add joy-pad support, and I'm not going to ask you to. However, I'm trying to use JoyToKey to set up a controller I bought yesterday, and am having a bit of trouble figuring out a decent setup for it. It's basically identical to a PlayStation 2 controller, except the left analog stick and control pad are switched around. Any suggestions on how I should set it up?

Finally, Would it be possible for you to include something like Paper Mario's Tattle Log? I'm really liking the development comments on each scan, and it would be more convenient to be able to look through a log for the different remarks.

If you're in Chapter 3, then after talking with those two, you'll exit the city and head back the way you came, something will be different as Jeremy said. I'll check the dialogue to make sure I didn't fudge something, which is very possible.

A mission recap is a feature I'll probably add in later. (It's already on my to-do list.) The game is huge, much larger than DT1, so it could benefit greatly from that.

As for the 'Tattle Log', that's a definite possibility. Tagging enemies would be easy and they're already categorized in an excel document. Again, that's something for the final release, and a thing I like.

Will it let me comment on anonymous? Yeah, I showed ShadeWearingHero the game after deciding I wanted him to suffer just as much as I did when playing. As you guessed, I just want to laugh at his misery.

About the final part of DT2,
I 100%'d the game before facing the final boss and afterwards it threw me into the bonus room while still not having any of my abilities. I had to actually restart before I could fully explore the secret room.

As for that bug with the extras room. It was fixed in version 3.1.

I WILL NOT LET THE GAME BEAT ME, I SHALL PRESS ON. LIKE A TRUE HERO.

But really, thanks for the mention Zephyr! Absolutely loving Distorted Travesty. So much fun!

I managed to get that hidden achievement in DT2 Gradius level. It was pretty tough; bombing at the right times helped. I was surprised though at how much chaining kills helps your score.

I was busy taking a screenshot so I haven't checked, but does the combo go over 100? And is the achievement once-per-level?

@ano0maly Well that's what you get with exponential scoring systems.
The max chain you can get is 180 and that is assuming you chain the entire level, so no the achievement only shows up once. Although it does show up every time you play the level and get a 100 chain.
Bit confused why you call it the Gradius level as it's absolutely nothing like Gradius aside from a few cameo's but that's neither here nor there.