Nah, I didn't forget. Busy days are just busy... moving preparations and all that. Two more weeks and I'll be moving, pretty exciting! Almost everything is done for the move though, yay! Now onto the update. 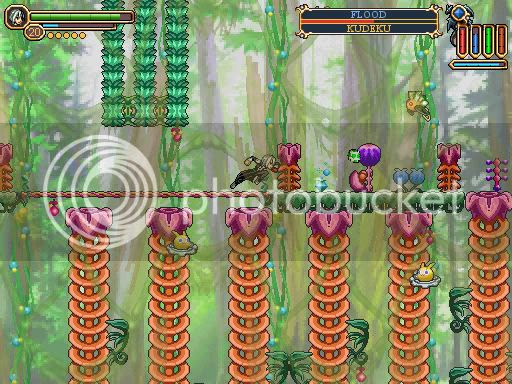 Various Changes
- The Cheese Garden level does not show when you have all the pickups, but they're in plain sight, you don't need the game to tell you for that level. :P (It's been fixed of course.)
- Knockback and flinch time have been reduced again... this time drastically. You will definitely notice a difference in the air. With Air Dashing, you can even save yourself from those dreaded bottomless pits.
For those that finished the new demo:
- You will have noticed that "Flood" acts awkwardly when you use it. Silly mistake on my part. (Fixed, and luckily it's at the end of the demo and not used for the game yet.)
- I changed "Blast Off" a bit. It's casting time is considerably shorter, but there is a cool-down for using it now. The cooldown is shown in mmo style next to your health. (Same as status changes, both good and bad.) This also kills off a lot of easily broken sections in the game. (However, the cool-down time for this is 3 seconds, if someone was able to keep their air time up that long, they could theoretically go as high as they wanted.) :P

Something some of you will find awesome:
The arrow keys are now supported everywhere. Movement, menus, everything. They can't be reconfigured, they just work on top of the normal configurable WASD.

Stuff
Yeah, I haven't really been doing much on DT this last week... for obvious reasons. So not really much of an update this time. :( Late AND short. :P
Posted by ZephyrBurst at 4:24 AM