Edit: (06/09/2010) How about a video showing those spinning death spikes. Also it gets much worse than this. Imagine what things would be like when you get your dash back.
Video

Not really sure what the title means... or do I?
I've come upon an odd revelation, I think I secretly hate games and it's so secret that not even I know about it. Wait, that's not true. It is, but it isn't. I find myself playing Independent games much more often than anything. So enough of that.

Broken Trap
I call this update broken gameplay because I am announcing a new late game trap that somewhat breaks the game. This trap will still damage you even if you are dashing.

Yes, you heard/read correctly. The jump attack (and Grand Slam) will still go through it though. How about a screenshot... 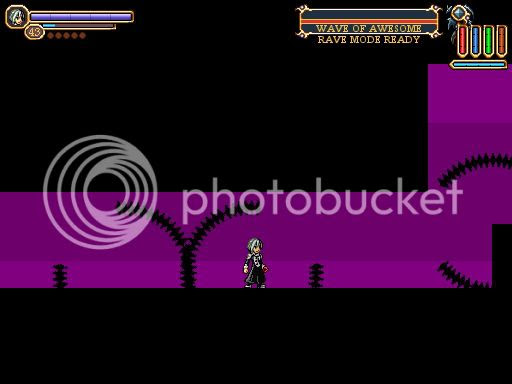 Those spikey circles that you see will be a hated sight. If you already couldn't tell from the screenshot, they spin and have an open spot for you to get through. The screenshot shows that you have no dash points as well. The first time you are introduced to these, your dash will be disabled to encourage you to get used to not dashing through them. These easily break what I have been teaching you throughout the game and because of this, are the only thing that will break through your dash. There's enough for you to have to remember without having to remember some crazy amount of things that you can and can't dash through, so know that these will be the only game breaking object that you will encounter.

The Next Area
The forest and anything attached to that area will be full of obstacles. These are no combat heavy areas and there are few enemy encounters, especially after the forest. No worries though the Assault Unit, which is worse than the Shrouds, is coming up soon. They'll provide plenty of combat for you. :P

The end of the game is coming up soon so all of the more organized enemy types will be showing up.
Posted by ZephyrBurst at 2:04 AM

why did u change the template? or why did it change for me?

Just playing around with this one and seeing how it works. It offers some layout options that I like more.