Edit: (October 26,2012) Oh hey, another not so subtle change to the blog. It seems Jeremy has been plotting to get me a new computer. I don't know when he was planning on doing this, but if it's before I planned to build one in March next year then uh... I'll have one before that? That would be pretty nice as this machine is pretty slow, AND I'd be able to record again! Maybe that flawless playthrough of 'Think & Act Fast' will come sooner. I'm dreading that, I was only able to pull that off once and that was during development on DT1 when I was much better at the game. Plus I'm pretty sure I was feeding off some unknown source of godly gaming energy. Now to voice or not to voice it?

I'm pretty sure grackles have a game revolving around finding the most expensive looking car and pooping on it. As someone who finds luxury cars to be silly, I find this game to be in good humor. There are still birds in the store and people are convinced they should catch them with nets. This has been unsuccessful 99% of the time. I've been trying to tell them to try using a trap door type of deal with a trail of bread crumbs leading in. Set it up quickly when they see the birds and wait at a good distance. Then once one is in the box, the bird can be freed outside. My advice has fallen on deaf ears it seems. Trying to catch a bird with a net is hard. A coworker told me that last year a bat got in the store. I replied with, "That's awesome!" The person gave me that look as if I'm crazy, then said something about it being a heath concern, as are the birds. I replied with, "So hundreds of people all in one store isn't a health concern?" I find that a single bat or bird every few months should be the least of our concerns as far as diseases spreading goes. "But the birds get into the food and fruits." This is a legit concern, but customers do the same... daily. 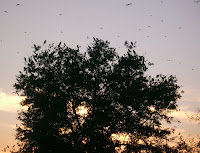 Unfortunately I was not able to get a picture when the entire flock was overhead, but I did manage to this one. Every evening around 6pm-6:40pm, they gather up everyone and roost.

I had quite the audience.

I noticed this one making noise/singing, so I waited for him to do it again as I was sure he would. I like when they puff up their feathers when they sing.

Here's a shot of a female getting very close.

And surprise to me, so did this guy. He was walking away when I got the shot, so he was actually a bit closer than this at one point. It always surprises me when the males come close. The flash was on for this and the previous shot, so they have this weird drop shadow.


DT3 Physics and Controls
In the DT3 demo, Claire's control still uses the loose methods that DT1 and 2 use. In future versions, Claire matches Jerry's tight control. DT3 requires more precision than its predecessors and those controls don't work well for it. After playing with Jerry's new control in DT3 and swapping to Claire, she felt too loose for the game. Her crazy dash and slide momentum is still in place and is now slightly more exaggerated. Underwater controls are the same.

A few more control nuances will make its way to the dashes in DT3. Jerry's forward dash will stay the same, but Claire's forward dash will be changed so that holding forward will not cancel its momentum. Pressing forward or back during its duration will still end it though. Claire's back dash will probably stay as it is. Jerry's back dash may change quite a bit. Currently there have not been any levels based around his current back dash mechanic so only minor changes may need to be changed to existing levels if that happens.

Due to Slaix bitching at me, the character swap delay during split party sections is being reduced to 1/3 the normal time. The change for those sections feels right, so props to him.

Here's a shot of a new area where everything takes a turn for the bright and happy. Birds fly about, flowers dance and cuddle, and the music pretty upbeat.

The similarities with the game raocow is playing nearly got me to move this level to a later section or remove it completely. It stayed. The dungeon in Chapter 9 is mostly based around Jerry and Claire working together. The boss fight is also the first and one of the few bosses that use the split mechanic.

Now that I look at it, this shot is boring.

Chapter 9 is getting close to ending. It's a fairly short one that leads straight into the Black Rock of DT3 and the big turning point in the plot.

This Other Game Idea
I had a game idea last year where the basic setup is a physics based platformer, but when you die, your past body is left behind. You can then use this body for whatever you want. I had many thoughts on the applications of this, but my most fond one is throwing the body to overhead spikes, thus impaling it, and using it as a swinging rope.
Posted by ZephyrBurst at 11:49 PM

Speaking of the DT3 demo, I've finally finished my feedback on that and you can find it on the talkhaus here along with An0maly's:

Seriously don't read it all at once.

I didn't end up mentioning the delay between character swaps at all, but it did feel a bit long and the change is appreciated.

Too late, I read it all. Thanks for that input, it's super useful.

I'll give you a better reply on the talkhaus sometime in the next few days, which should also answer some of Anomally's thingies.

Oh yeah, on a side note, the DT help thread was moved to "the cartridgé. This was part of restructuring the forums a bit about two weeks ago.

Formerly it was Romhack Shack for discussing modified ROMs. The cartridgé is now a forum for game discussion outside the active let's plays, so check it out.

You know, just in case you didn't get enough words.

I read about your game idea and immediately thought of this...

Anyways, I was wanting to ask, is there any way you can add controller support to this? I'm using a PC controller and JoyToKey to try and play this, and for some reason the control stick gets to where it thinks I'm pressing up or down when I'm trying to go left or right. I figured that maybe if the controller support was built-in, it might help with that problem a bit. Not important or anything, I just thought of it when I saw the name of the post.