No new bird pictures today (well there is one) despite there being lots of birds now. Sometimes I wondered if after shaving, the birds would still recognize me, but they have no problem with that. I stopped to have a conversation with a co-worker today and this bird landed on a rail behind me, then stood there for quite awhile about 1 1/2 feet from me. 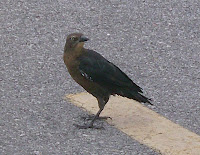 I should name her, but I'm no good with names. My bird with the short tail feathers, I've usually called 'Grumpy' cause he doesn't usually like other birds around him during the day.


She waited there for about 2 minutes while I talked with the co-worker before I gave her something. These days, she's the bravest of the birds as far as approaching me goes. She won't eat out of my hand, but she has no problems coming within inches of me now.

Other LPs
The LP I mentioned last week that I didn't have the link of is actually one I had seen before but neglected to mention here. It wasn't Spanish, but Brazillian Portuguese, as I was told. You can find it here by SonicShadowPSF. He's playing on Veteran.

There is one more LP though. This one is by ShadeWearingHero's friend who showed him the game. He's playing it on Distorted and has said he may not finish it. He's just seeing how far he'll go before he ragequits the game and cries... One or the other. Place your bets!! Oh yeah, it's by kagesadaa.

GDC Austin
I'll be at GDC this week, so responses will be delayed till Friday or Saturday.
Posted by ZephyrBurst at 3:48 AM

I'm placing my bet on him giving up somewhere between the first visit to Abstracity and Black Rock Fortress.

This seems rather stupid to ask considering you're not even finished with DT3, but is it going to be the last game in the set, or is there enough that you want to do with it to warrant another sequel? I mean, even if you want DT3 to be the last part of Jerry/Jeremy/Chao/Claire's story, you can always do another one with a new character or revisit some situations with past characters. (I kind of want to see what had happened to Syrus and Co. back in DT1 while they were trapped in the Vault with all the different viruses and stuff)

I could see past/side stories, but as for any direct sequel, no way, DT3 closes this arc in the end. I never had any plans to do anything after DT3. I've got other projects that currently get a tiny bit of attention here and there. When DT3 is finished, they'll be the focus.

So without spoiling what these other projects are, can you at least tell us which genre they are? Are theyy platforming games or RPGs?

One is a game for PC and possibly mobile that I haven't been calling a game at all due to it having a lot of non-game elements. More an interactive experience is what I like to call it. It has no real win or loss conditions, it's more to get an emotional response from the user. The polar opposite of DT. :P

Oh, I also get emotional when I interact with DT, so there's not that much difference. :D

You mean like a Visual Novel? I like those. My favorites are Katawa Shoujo, Fate/Stay Night, and Snow Sakura. (If they count, I love the Ace Attorney series even more, though)

It's not at all a visual novel. The player has interactions with the world and its characters, but there is 0 dialogue.

Not even close. I'll be touching on it in the next post.

Looking forward to it. You've got me interested. I love seeing new or unique ways of telling a story. I've been having a conversation online on how to tell a compelling story with different things such as an MMO.