There's actually stuff to talk about, and again, I'm going to split it up between 2 posts. Oh yeah, I'm finally back into my normal routine, had a busy 2 weeks.

Of course the first thing to mention is birds. Last week was an interesting one with a particular bird. All throughout the week she approached like many have in the past, but she never shy'd away from anything I did like a lot of them do. Every day she would come just a bit closer till she was at the edge of my hand. They'll come over to my feet, but when I kneel down, they typically back off a bit. I noticed they look at faces a lot and always look directly into your eyes. So I thought, I'll try keeping the food in my hand instead of putting some on the ground in front of me. She waited maybe 3 seconds before making the choice to come over and eat it straight out of my hand. This happened on multiple occasions throughout the day. She took less time to approach and was less apprehensive on each following encounter. On another moment, she had no problems being nearly eye level with me at close proximity when she was on a tree. The next day I tried to get a picture of her in action, but one thing she shared in common with the others birds was she didn't like the camera. She'll get close, but won't eat from my hand if the camera is out. Maybe I'll find a way to keep the lense unblocked while the rest of the camera is hidden, though if it's the lense that they don't like, that won't work. I've thought about setting the camera down and backing away a bit to see if they'll inspect the camera then.

Here she is looking straight into the camera. This is about as close as she'll come to it. 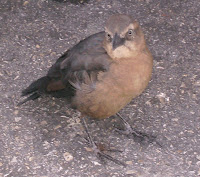 You can see her poofy feathers pretty well here. 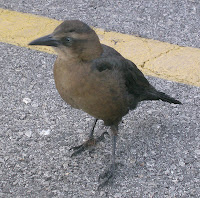 She was turning her head right as I got this picture. That string on her feet is now mostly off. She had less and less of it every day. The easy way I tell her apart from the others is that bit of fluff on her feathers. There's also a certain marking on her head. Though an even easier way to tell is that she's the one that wastes no time running/flying over to me.


Different birds here. It was interesting that the far back one laid down so close to me. No worries, she's not hurt. A bit after this pic was taken, she did the same thing and every time the wind picked up, she brought her wings up.


Slit08's DT2 LP
Slit08 has an LP of DT2 up and completed in 5 videos. First one here. He doesn't go for 100%, but the play-through is done well. I enjoyed his fight with Harpuia quite a bit and it shows he has a very good grasp on the game's dodging mechanics. He also beasts right through the final level, even with the nerf it got, that's still pretty good. The only map he has trouble with is Sector 4. That's another thing where I'd like to showcase hilariously easy ways through hard looking obstacles. You can get through that cluster of red rings unscathed in about 3 seconds.

NegativeZeroZ's DT1 S Rank LP
For anyone that doesn't know. An overall S rank is when you A rank all categories on the Distorted setting. The reward, which isn't there in any release, is it will tell you on the title screen how to unlock the debug mode for the game. (Or at least some of its functionality.) That will be patched soon. No big rush as I don't think there's a lot of demand for that. :P

Anyway, Zero has done the S rank. I don't know why anyone would ever attempt such a thing, let alone succeed at it. Hats off to you. He makes good use of every spell the game has as well as any exploits that would benefit him. As I've said in the past, if you find an exploit, use it.

A Voice Interview
Hadriex (gamerzsnark) caught me some months ago and forced me to do an audio interview with him as he's converting all his text interviews over to that. Since he forced me to, I had no choice. He had a spoon and I didn't know how to react to that other than give in to his demands. It can be found here in this sentence. So yeah, you'll hear me. Don't remember that voice or I shall have to hunt you down. We're not sure if it was on his end or mine, but my voice is choppy in places. No amount of tweaking settings seemed to fix this, but most of the time, I'm understandable. On the good side, Hadriex was awesome enough to subtitle everything. If you thought my writing was unfocused and all over the place at times, my speaking will go beyond that. I had my answers to his text interview on hand, but I kinda just tossed that to the side and went with an unscripted mess of words. Which is... more my style. We did do a second take on I think 3 questions and only a part of each of them.
Posted by ZephyrBurst at 1:57 AM

Aw come on, you should have known the way you worded Jeremy's dialogue would tempt someone to go for it. =P

Once the patch gets released, it'll only be a matter of time until someone hacks their save to get an S Rank and the way to unlock it goes public. In the meantime, I think I'll make a teaser video showing a bit of what it can do.

Also, Slit's LP of DT2 was really good. I did a double-take when he did that virus chaser section without damage on his first try. The player doesn't have much incentive to do the final level more than once, so that was pretty impressive to say the least.

Hey, you watched Spice and Wolf? Nice! That series was pretty detail-heavy on how trade works. Hard to follow but interesting all the same.

Ya, Jerry got me into both that and Code Geass, which is very contrived in many places, but that aside, played out in an interesting way.

Spice and Wolf is just nice on all fronts. It was the fine details on trade that I really loved about the show. When I first started watching it, I thought it was just going to go in the fan-service route with the whole 'naked wolf girl' thing near the beginning, but it steered way clear of that. I didn't know anything about it going into it, which is how Jerry always presents any anime to me, he just has me watch it. By now he knows not to tell me anything but the generall premise, otherwise I'll probably just start hating on it for no given reason.