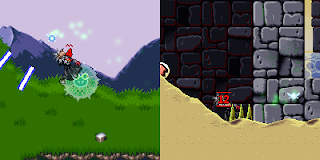 There's plenty of other changes and QoL fixes coming, plus of course some big surprises that I've not so subtly been hinting at since around April. (Just don't bother asking about it, cause I won't comment on it. :3)
Posted by ZephyrBurst at 6:16 PM

Revamped epilogue, hmm. This intrigues me.
Also, will it be possible to get the Spring Ball if Gate 5 is already beaten, or will I have to make a new file to get it?

You'll be able to go back into Gate 5 and grab the Spring Ball. It's easier after it's beaten anyway because the terminal tells you which sector it's in.

I'm secretly hoping you either changed nothing about the ending, or just have Cyrus insult the player for expecting more.

Basically I can't be disappointed in what comes with this patch.

Yeah, if there's some way to check if the game's been beaten already and on what version it was beaten, that would be a nice little easter egg for anybody who replays the ending just to see if the end changes.

You've mentioned previously that the new update might contain the Bubble Key, will the area unlocked by that contain some new items or content? Curious.

The anticipation is building.

Yeah, I've just been really busy with stuff away from DT. I kinda feel bad leaving it be for so long cause I don't want to kill off that anticipation. I know I've had the same feeling happen to me waiting too long for something.

There IS new content. As for new items, there's only one so far that I've added, which is the Spring Ball, which was placed in Gate 5. I've been wanting to post screenshots, but I also want to keep it all a surprise, which is what's gonna happen. It'll be more fun when it does arrive. Soon™

"stuff away from DT."

Like working for Blizzard! How else would you be allowed to use the Soon™?!

(still excited for it, don't worry)

Will it be released this year at least?

I hope so, but I won't make promises at this point. It's not even in testing yet. As in I haven't given it to the testers since I don't feel it's ready for them.